Has it really been a week since I posted last?  My apologies!  The week was consumed by duplicate stitch.  But now that is done, and as soon as the body of the sweater dries, I can set in the sleeves and the snaps and it will be done!  But for now, it is drying.  As is a swatch for another sweater, and a hat I knit for the Irishman.  And I finished the Animal Crackers socks, which haven't even been washed yet because I wore them immediately.  (It was chilly.)

In fact, I don't have anything on the needles but the mindless socks for my mom and my perpetual raglan sweater.  It is a very odd feeling.  Right now I am virtuously persisting on the raglan rather than casting on something knew, but I can't promise this will last.

In lieu of knitting content, let me tell you about my new spinning wheel.  Oh, that's right, I bought a wheel about six weeks ago.

I had no intention of doing so!  It was Aspen's fault!

You see, on Labor Day we went to Paradise Fibers.  Aspen was actively shopping for a wheel, so she was trying out this, that, and the other thing all over the place.  I spun on a few, but as I wasn't looking for one, I didn't really put any through their paces.  I did come away thinking that if I were ever to get another wheel, a Schacht Matchless would really be the wheel for me.  But the cost is rather prohibitive, and I wasn't in the market.

The next weekend, I went to my LYS for knit group, and, lo and behold, there was a flyer up from someone selling her Matchless.  For just about half the price of a new one.

So I bought the wheel, of course.  Isn't she pretty? 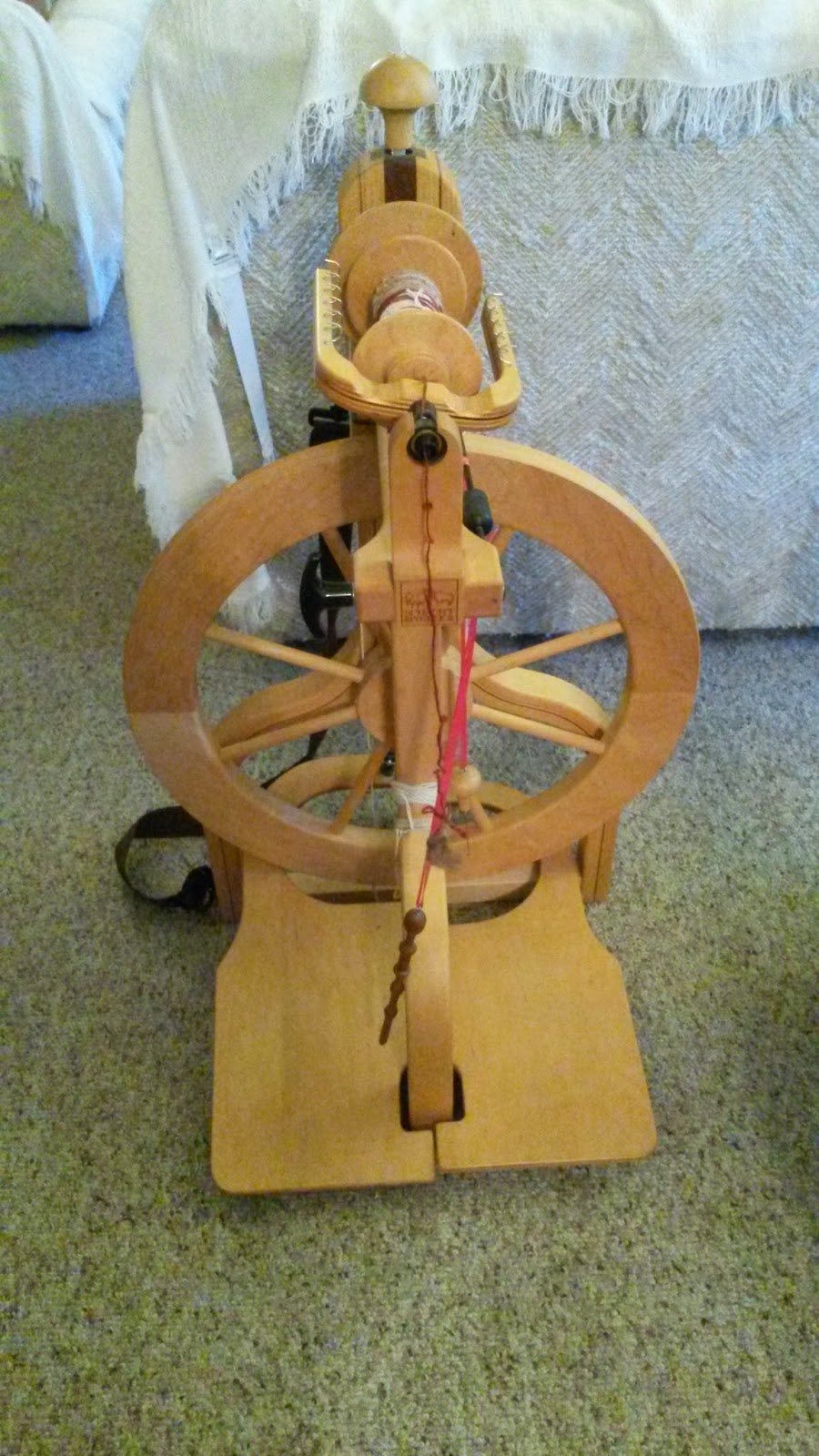 And I will never need another wheel again, as she does everything one would ever want to do.  Now I just need to get to spinning . . .
Posted by Lanafactrix at 11:23 PM 1 comment:

My friend Kate Heppell (best known for Love in a Cold Climate) has two promos going on at the moment!

First, her ebook, Shetland Story, is 25% off with the code SHETLAND25.

And second, her newly self-published Insight: a Reversible Sweater is half-price until October 17, making it about $4 USD--a steal!

Posted by Lanafactrix at 6:19 PM No comments:

So far, this has been a rather frustrating week.  Remember the baby sweater?


All the pieces are knit, and all the extant ends woven in.  Next is the duplicate stitch to form the plaid pattern.  At first, I thought this would be a doddle, as I could use the crochet hook method (explained very nicely here), but it turned out not to be workable.  (The crochet stitches spread the knitting too far and make it look funny.)  So now I am duplicate stitching, stitch by tedious stitch.  It is customary at this junction to request that others send alcohol, or chocolate, or whatever the knitter's personal vice may be, but in this case I don't think that legal stimulants will cut it.  Send methamphetamine.


Next, my mindless sock-in-progress went from this (plus about two inches, since I worked on it at the movies the other day): 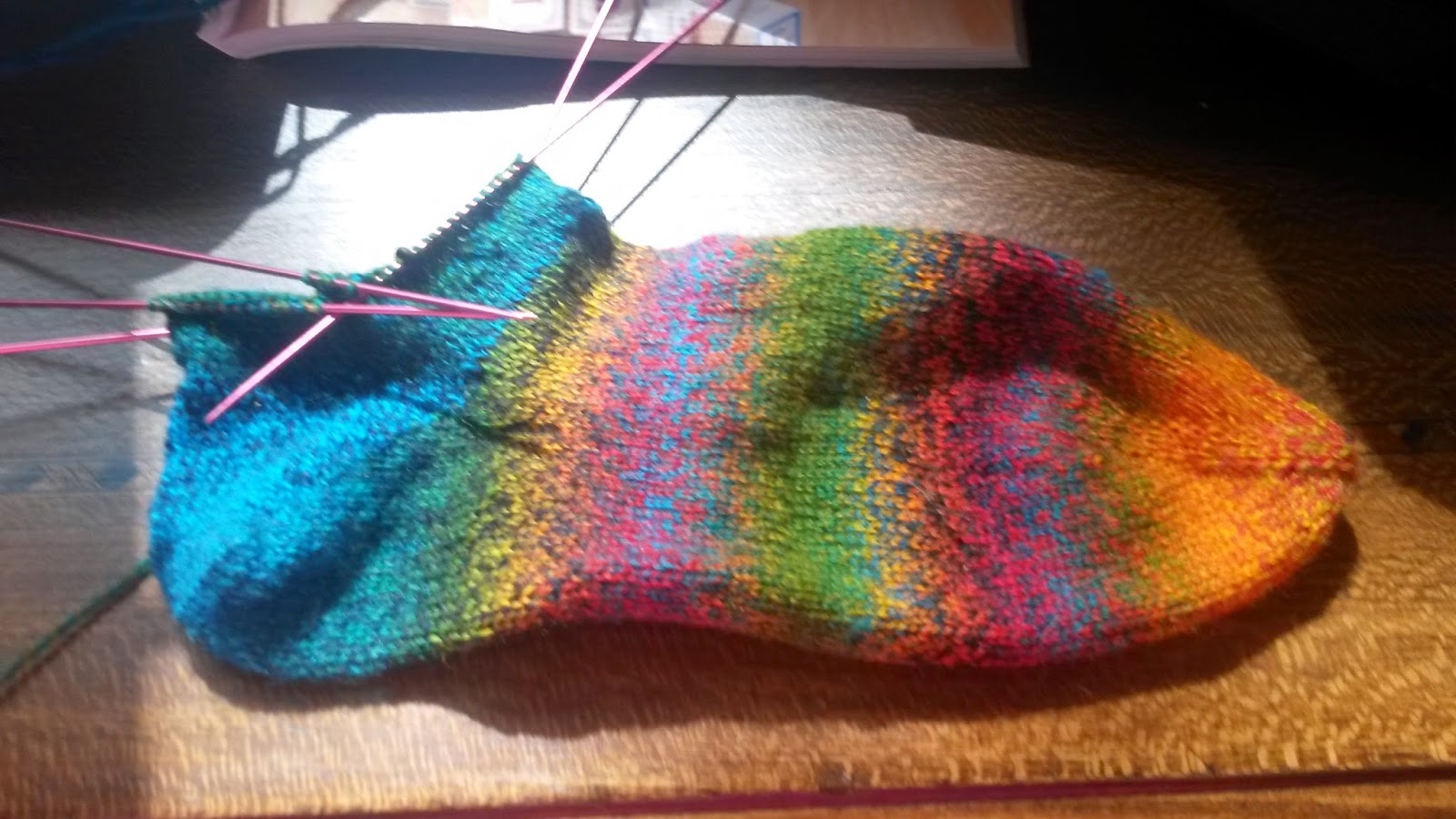 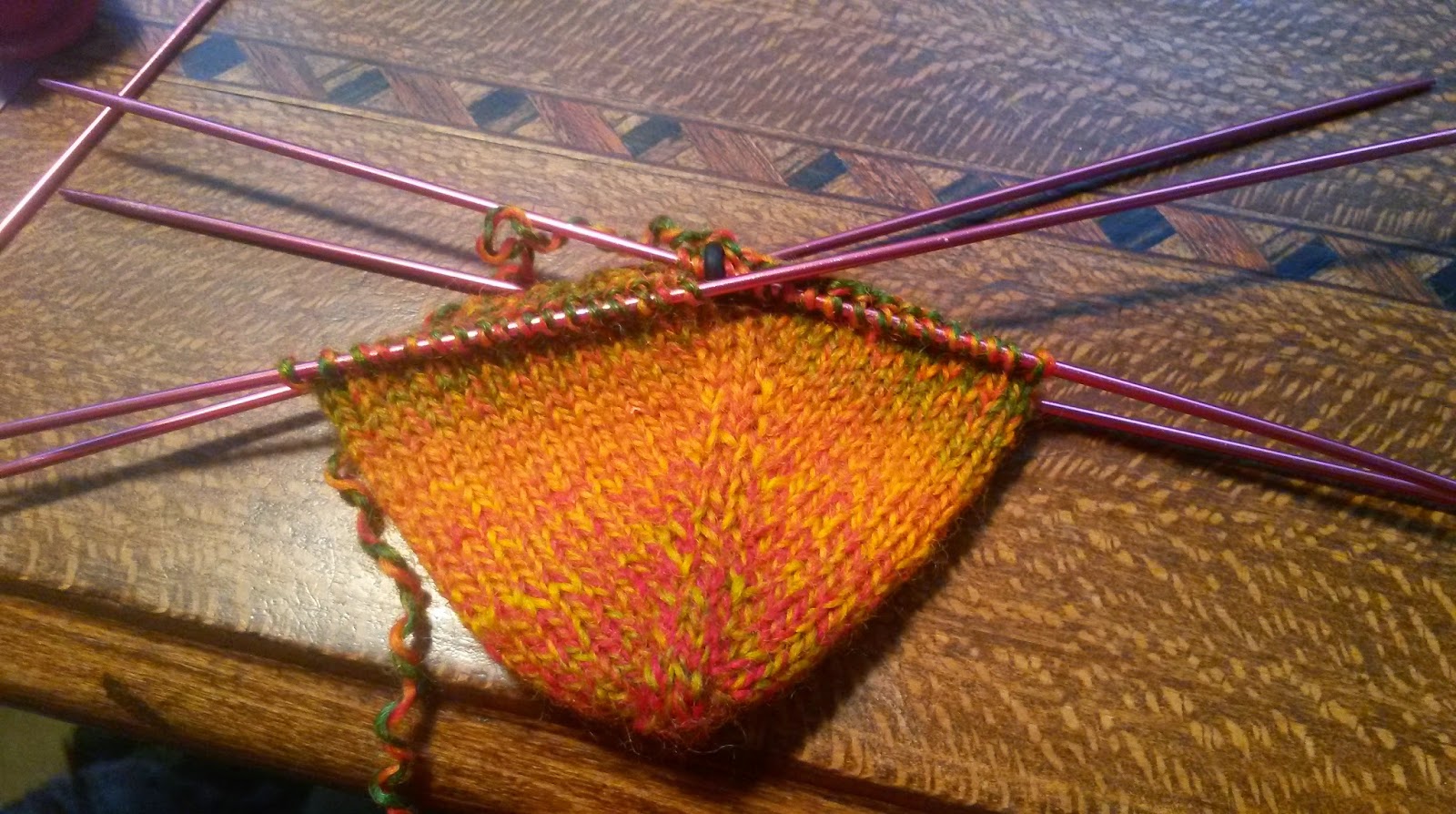 as I finally accepted that it was going to be too big to fit the intended recipient.  The good news, I suppose, is that eight fewer stitches will be that much quicker to knit.  But!!

And finally, I have hauled out a UFO that is positively ancient, by my standards--it was begun in March 2012.   It's a top-down raglan sweater (read: boring), and I don't really like it?  I think I will like the finished product, but the knitting of it is tedious, and I didn't do a very good job with the pattern.


I feel like casting on something very easy and bulky, just so I'll have the satisfaction of finishing it.
Posted by Lanafactrix at 5:59 PM No comments: 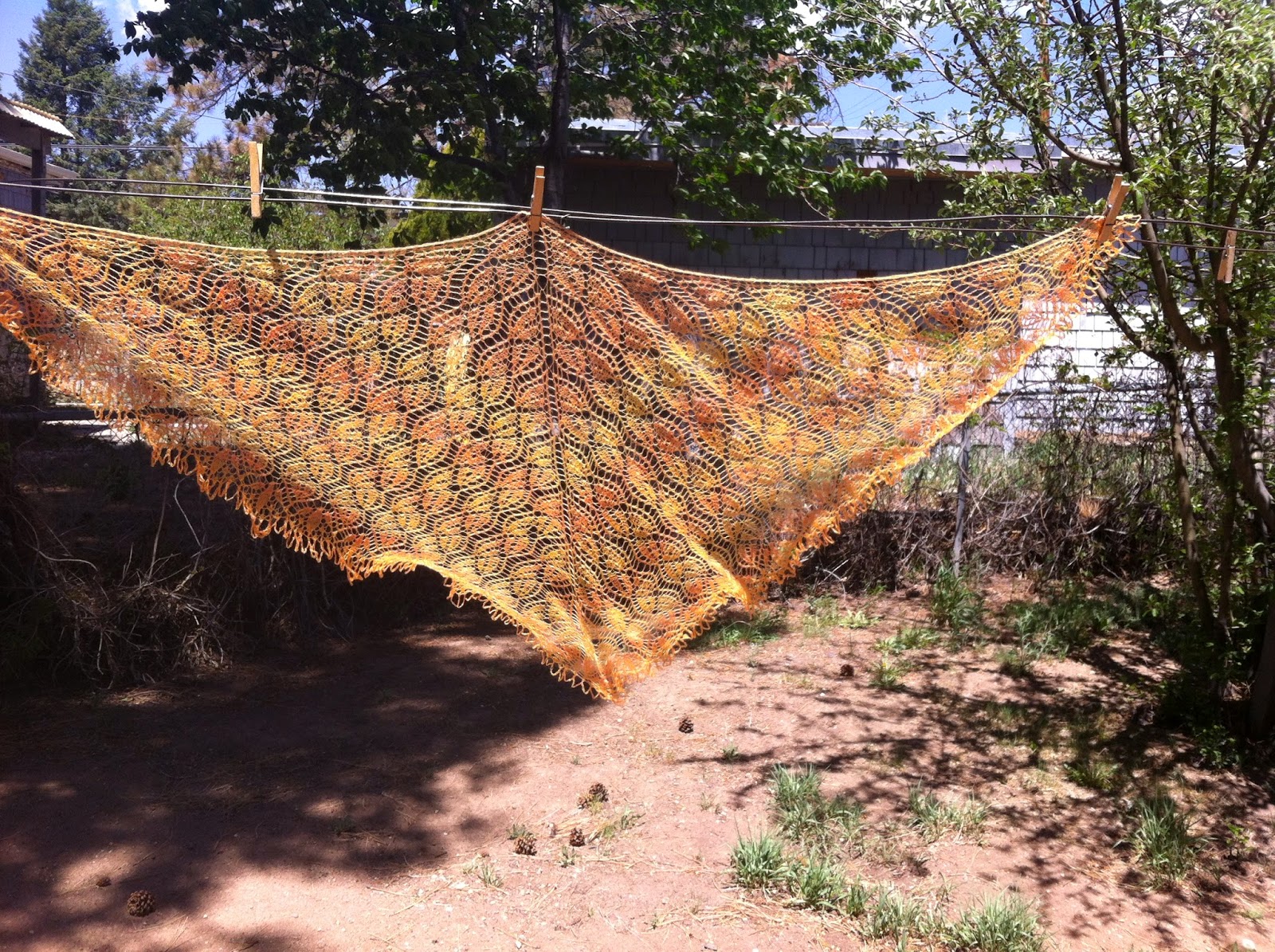 Anyway, I finally took it up seriously last spring (that would be 2013, for those who have completely lost the plot) and knit until I got bored.  But this time I decided it was big enough and bound it off.  Yay. 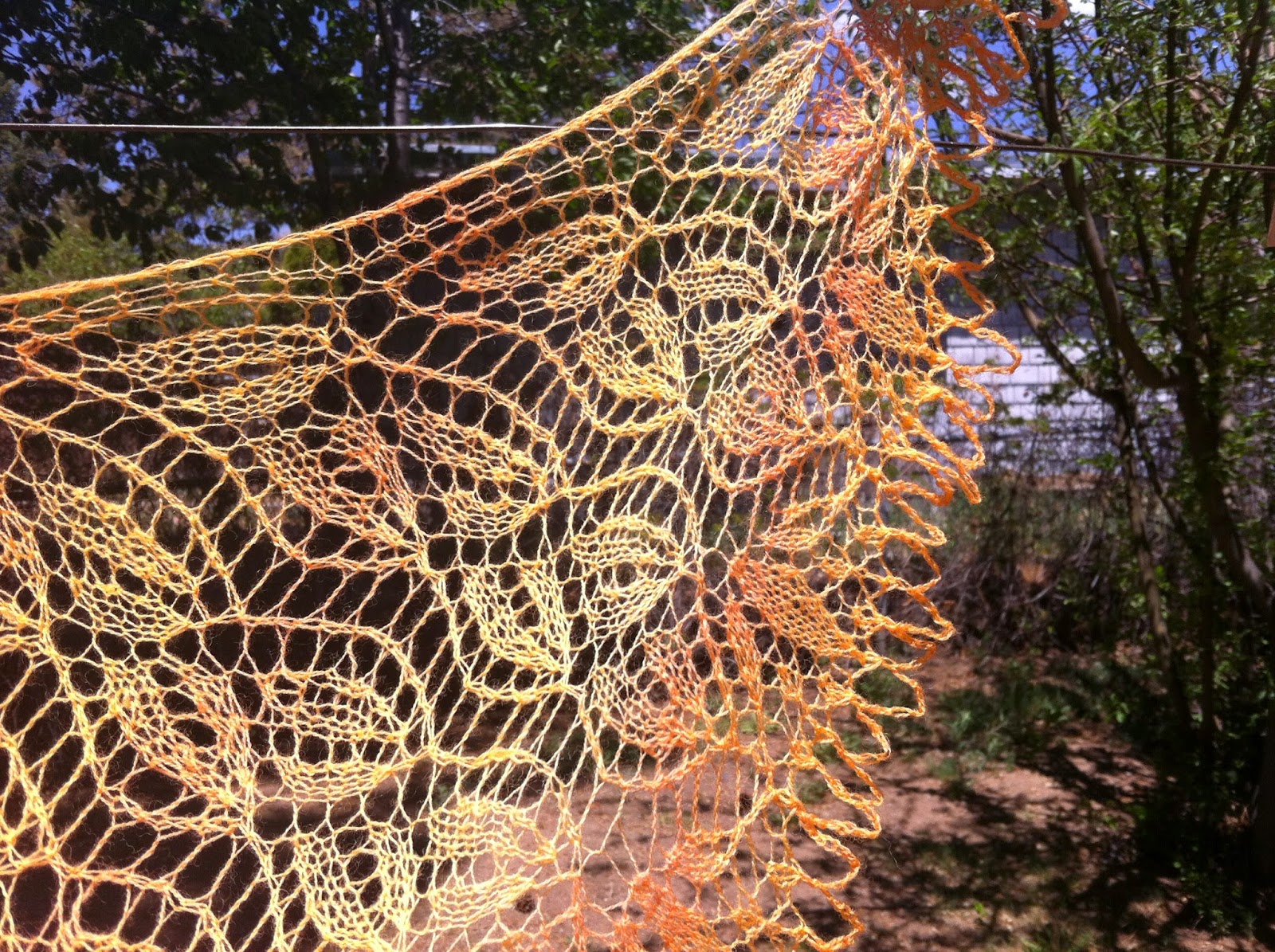 NOTES: I think I made eight repeats, but I'm really not sure.  Whatever.  It was big enough (about 60x32").  It has since gone to live with Aspen because orange is so not my color. 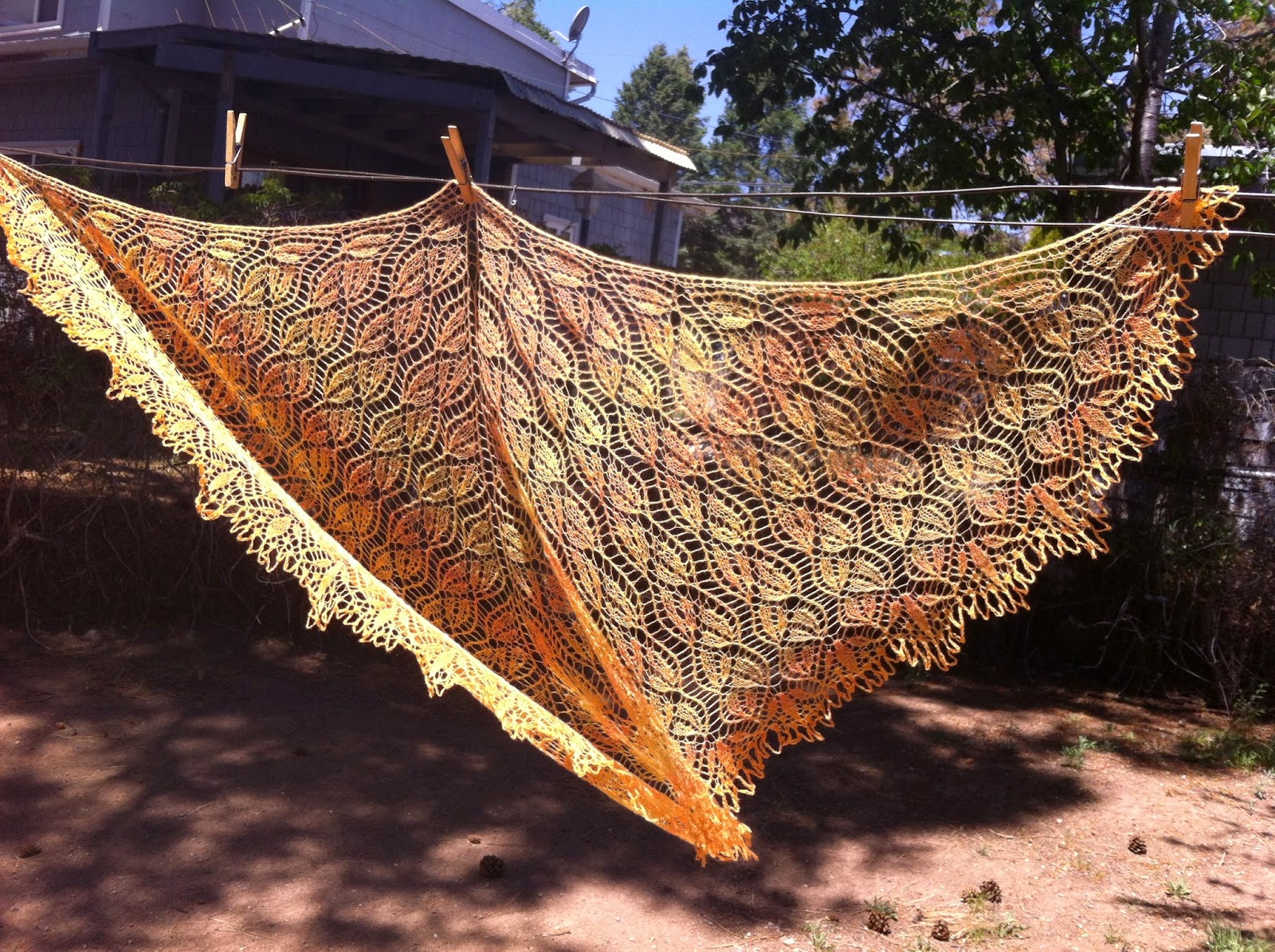 Posted by Lanafactrix at 2:55 PM No comments: 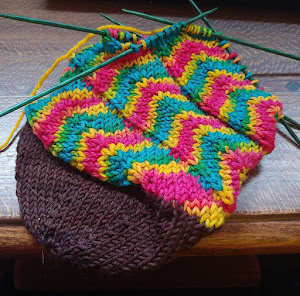